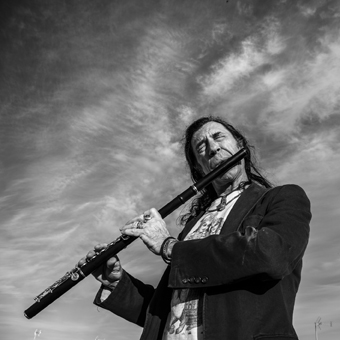 He was born in Madrid (Spain), December 1, 1956. He starts young playing the guitar but soon he is attracted to the world of wind instruments. His musical references are many artists and different styles. Professionally he starts playing in the city «haunts». Diego Carrasco, Jean Luc Vallet, Manuel Soler, Peer Wyboris, David Thomas, Ricardo Miralles, Pedro Iturralde, Vlady Bas, among others, are references and  masters of his environment. His first professional recording with Las Grecas is an anecdote, late in Dolores Band, He is grouped around Pedro Ruy Blas and several musicians of the Madrid scene, to record 3 LPs and in one of them appears Paco de Lucia, with whom he will work over time in many recordings and worldwide tours. Also at the same time he met Camarón, and records in La «Leyenda del Tiempo», since then, more than 20 albums and several trips around the world taking his personal language and vision of the Hispanic musical tradition. He is a usual partner of Chick Corea, and plays in his band Touchstone on a worldwide tour. His collaborators list extends covering the most diverse styles and backgrounds, from «solo flute» to his latest Flamenco Big Band project Huellas XL, flamenco and jazz trios or symphonics projects make this musician, an authentic  all-terrain.

There are musicians who are masters at what they do but become torpid with other musics, others manage to mix languages ​​with relative ease, but only a few are genuine alchemists, those who know the nature and properties of the metals they want to merge  and they know to get pure art through the alchemy. Faustino Nuñez.